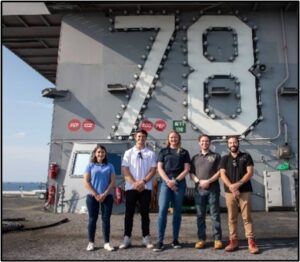 The trial consisted of three shots, executed in summer 2021. On each potential shot day, the deciding stakeholders would gather to make the final call on execution. This “GO/NO GO” decision was based on ship readiness along with numerous environmental factors such as wave and swell height, wind speeds, cloud coverage, etc. The location of nearby mammals was also monitored and tracked up until the final countdown to ensure no injuries.

Gibbs & Cox, a wholly owned subsidiary of Leidos, supported the event as the Mechanical, Hull, and Damage Control Leads. In these roles, the team spent months coordinating the system’s In-Service Engineering Agents (ISEAs), working to prepare system evaluation procedures to be executed prior to, between shot, and after all of shock trials. During the trial, our team worked with their respective ISEA riders and ship’s force counterparts to ensure the execution and documentation of all procedures.

They also aided in any troubleshooting, mitigation, and/or remedies required as they arose.

Our team also acted as the shock trial card investigators. Immediately after each shot, damage control responders conducted a rapid investigation, looking for any signs of floods or fires and quickly restoring any systems that went offline. Once the ship was secured from general quarters, the remaining crew and civilian riders performed a scrutinous assessment of the integrity of the ship and its systems. These assessments took place over the next four to five days at sea and continued when the ship returned to port. Any deficiencies identified, from leaking pipe fittings to sheared bolts,

and equipment failing to operate (where these items were satisfactory prior to the shot[s]), were recorded as formal shock trial cards (STC) and later translated into a digital database called ETC.

The STC investigators gathered the high priority deficiencies and inspected them to determine exactly how the discrepancies occurred and to make recommendations on how to reconfigure the installation or design to avoid repeat failure in a real damage scenario. The STC investigator team also participated in discussions on the Hull, Mechanical, and Electrical STCs during the daily shock assessment meeting.

After the final blast, CVN 78 returned to port, before transiting to Newport News Shipyard for a six month Planned Incremental Availability (PIA) period. The Gibbs & Cox Team remained onsite in Norfolk and Newport News, Virginia for two weeks to complete the post-trial system evaluations and full ship structural inspection. For the next year, the Gibbs & Cox team will continue to support in the preparation and finalization of the official Shock Trial Report.

In the tragic events of World War II, a significant number of vessels and the lives aboard were lost as a result of near-hit misses. The underwater explosions (referred to as UNDEX) were incapacitating, causing catastrophic degradation to complete failures of the ship hull’s watertight and structural integrity because of the fragmentation and blast. In the early 1950s, the U.S. Navy Shock Program was implemented, exercising the importance of Underwater explosion (UNDEX) shock threats in the design, construction, install and test phases of both surface and submarine ships. In addition to the extensive efforts exhausted on shock design criteria for the overall hull and individual vital system components, one of the more important results of this program was to implement a full-scale live-fire shock trial test event shock trials consist of three explosions, ranging between 10,000 and 40,000 lbs. of charge, which are sequentially brought closer to the hull of the test ship. The objective of the trial was to capture the survivability of the

vessel and the maintainability of mission critical capabilities for its systems. For the GRF, the focus of the mission critical systems included the Aircraft Weapons Elevators (AWE), Electromagnetic Aircraft Launching System (EMALS), and the Advanced Arresting Gear (AAG).

Gibbs & Cox has participated in the U.S. Navy’s Shock Program for decades, ensuring shock hardness is maintained during each phase of a ship’s lifecycle from concept design to sustainment and overhaul. A dedicated group of shock engineers work in Gibbs & Cox’s Survivability Department and provide subject matter expertise to shipyards, program offices, and manufacturers. Specifically, in addition to the CVN 78 FSST, Gibbs & Cox has significantly supported many shock trials. Working to improve the survivability of U.S. Navy ships so as to minimize the effects of shock is a job which has elicited a great deal of pride at Gibbs & Cox.